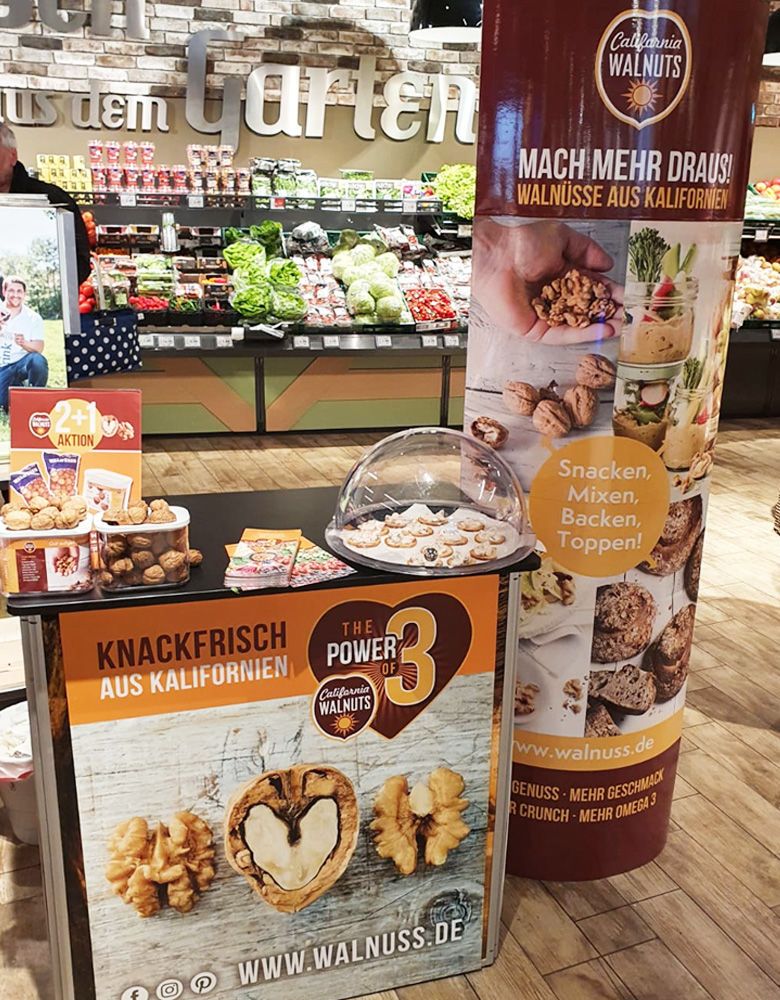 To increase awareness and consumer desire for California walnuts, a global campaign took place for the first time this year. The “Power of 3”, campaign  encouraged consumers of ten different countries to (1) eat at least three handfuls of walnuts every week, (2) learn about the health benefits of Omega-3 that walnuts contains more of than any other tree nut, and (3) share the campaign and knowledge of Omega-3 with at least three family members, friends or co-workers. The implementation of the campaign was different from country to country: In Japan consumers took part in a photo competition on Twitter, Spaniards tasted dishes of famous chefs and in England branded taxis drove through the capital.

In Germany the campaign Included online advertising, the integration into social media as well as promotions at POS created attention. Digital advertising on Google, Facebook, Instagram and Bring! led users to a landing page, specially designed for the campaign. This site offered plenty of information and was visited 12,000 times within a month! Here, a particular attraction was the global campaign video adapted for the German market with almost 70,000 viewers, as well as three recipe videos with up to 35,000 viewers. A competition with numerous participants generated additional enthusiasm.

The campaign was topped off by a POS promotion under the motto “3 good reasons for California walnuts”. The thirty-day in-store promotion included tastings, adequate informational material and a 2+1 sales promotion. Consumers could try tasty snacks with walnuts and take informative brochures and creative recipes with them. During the 2+1 sales promotion, customers received a free storage box with the purchase of two bags of in-shell walnuts. This strategy triggered numerous buying impulses and could increase the sales volume within the scope of the promotion days significantly. A total of almost 10,000 direct consumer contacts were made learning about the advantages of California walnuts.