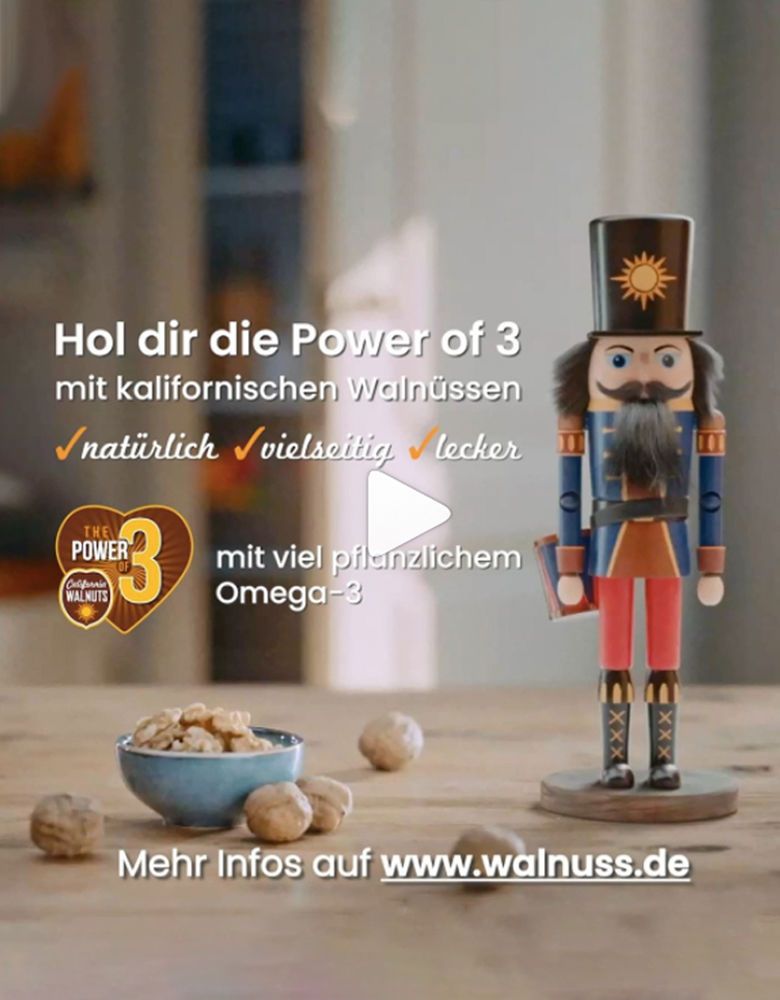 In March, the global initiative “Power of 3” took place for the second time. Characterized by the number 3, the campaign started on 3/3 with a worldwide kick-off and the aim to draw attention to the omega-3 content of walnuts and the health benefits connected to it. Chefs and influencers from all around the world demonstrated that California walnuts are versatile and perfect as ingredient for the most diverse country-specific dishes.

Since the start of the campaign, worldwide recipe videos with California walnuts were aired on all channels of the California Walnut Commission – presented by popular chefs and influencers of the participating countries. From Walnut-Guacamole with Roasted Tomatoes from the USA, to Gapao-Rice with Walnuts and Tofu from Japan, to Three-Grain Walnut-Bread from Germany – there was something for every taste.

In Germany the campaign was accompanied by various activities – among them online advertising, social media and POS promotions. Nutcracker Karl – the star of the TV spot – acted as campaign ambassador. He pleasantly promoted the advantages of “a handful of walnuts a day” and inspired his audience with creative ideas for versatile walnut snacks and dishes.

Digital advertising clips on Google, YouTube and Facebook were aired 2.5 million times during the “Power of 3” initiative and brought numerous consumers to the website www.walnuss.de. Especially successful was also a four-week long survey, connected to a raffle. Consumers were asked about their favorite seasonings and flavors for walnut snacks. You will find the interesting results in the following article.

Brilliantly completed was the “Power of 3” initiative through the success of an advertising campaign in the shopping app Bring!. Between January and April, 2021 the advertising measures on Bring! reached over 50 million impressions and catered for active sales promotion. Bring! users added California walnuts to the shopping list nearly 22,500 times.

The “Power of 3” theme was also integrated at the POS itself – an attractive 2+1 promotion created strong sales stimuli and actively boosted sales figures. You can read more about the POS activity here.