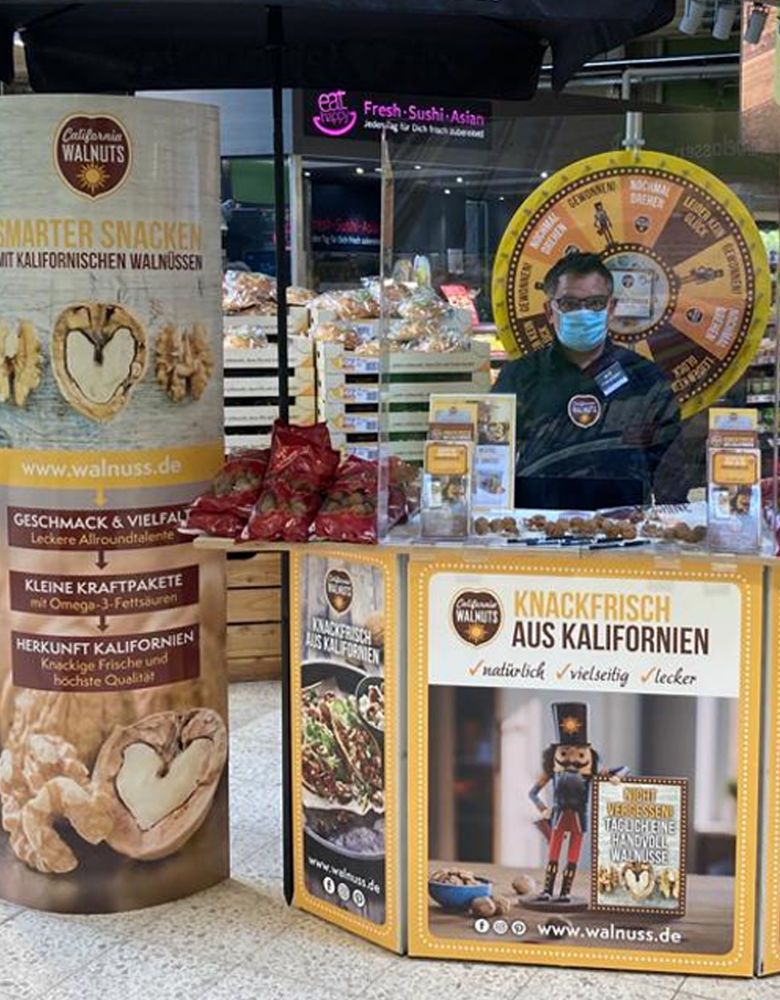 “Do not forget: Daily a handful of walnuts” – with this message the friendly nutcracker Karl (protagonist of this year’s TV spot) smiled at consumers from around 1,000 shopping carts in supermarkets German wide since December, 2020.

During the broadcast of the TV spot and the global “Power of 3” initiative, a 40-daylong POS activity led to effective direct contacts in March. An attractive raffle with wheel of fortune catered for special attention and motivated shoppers to visit the California walnuts informational booth. In the context of the “2+1” sales promotion consumers received a free storage box when purchasing two bags of in-shell walnuts. This strategy led to numerous buying impulses and increased the sales volume significantly during promotion days.

Another highlight of the POS campaign was the radio advertising, which was aired around the strong-selling Eastertime in 3,500 supermarkets over 3 weeks. Here the core message “Do not forget: Daily a handful of walnuts” was central as well.

The POS activities accompanied the CWC image campaign with TV spot and nutcracker Karl, which started at the beginning of the year and promoted California walnuts by attracting maximum attention. A total of 130 million potential contacts have been made so far through POS activities, TV spot and digital campaign. Numerous contacts will still be added through further digital components until year-end. And, of course, the friendly nutcracker Karl will still be seen around – for example as master baker during the Golden Walnut Award 2021, the professional baking competition of the CWC.

Did you already watch the TV spot? Have a look at www.californiawalnuts.de/166 – it is worth it.